Two days ago on December 18th, Division I student athletes across the nation participated in National Signing Day in which they officially signed their John Hancock’s to paper and committed themselves to college football programs all over the United States. In Minnesota, studs representing all positions on the football field gave their written promise to different programs across the Midwest, and Northstar Football News has compiled them all into this list for your easy enjoyment. Please comment if anyone has been forgotten, and I hope you enjoy. These athletes have worked their tails off to represent our state as well as give themselves the best possible chance of succeeding at the next level, and these many years of hard work have culminated into the 18th’s signings. Congrats to these young men and I hope you enjoy!

The University of Minnesota

A 3-star recruit who was the #4 ranked recruit in the Gopher state, Mann was named All-District in 2017, 2018 and 2019 and was an All-State Honoree in 2019. As a senior he caught 31 balls and averaged 23 yards per reception, while scoring eight touchdowns. As a junior, recorded 30 receptions for 729 yards and eight touchdowns and also rushed for 1,046 yards and 12 touchdowns. Combined for five kickoff and punt return touchdowns in high school. Also ran track for the Irish and his unofficial 40-yard dash time was 4.32. Competed in the Minnesota Football Showcase and was named the South Offensive MVP.

The number 18 ranked recruit in the state, Schroeder was named to the North Central All-District team in 2018 and 2019 and invited to participate in the 2019 Minnesota Football Showcase. He holds school records at St. Francis in receptions, yards and receptions in a season. As a junior, made 46 receptions for 573 yards and six touchdowns. As a sophomore, grabbed 42 receptions for 541 yards and three touchdowns.

Lindenberg was ranked the #5 ranked recruit in Minnesota and the 45th ranked OLB in 2020, the 2019 Minnesota Vikings All-State Team selection competed for the North team in the Minnesota Football Showcase. As a senior at Anoka he led the Tornadoes in receiving with 30 receptions and 506 yards and four touchdowns and added 233 passing yards and 150 rushing yards. Lindenberg also recorded the fourth most tackles total on the team. He’s projected to play OLB for the Golden Gophers. He was also a three star recruit.

Striggow was named All-District in 2018 and 2019 and earned All-State and Academic All-State honors in 2019 for the Orono Spartans where he them to a runner-up finish in the Minnesota state football championships. In 2019 he finished with 46 tackles including eight for loss, four sacks and one forced fumble and added 468 rushing yards, five rushing touchdowns and 598 all-purpose yards. As a junior, finished with 68 tackles, 13 tackles for loss, 11 sacks, two fumble recoveries, one interception and a blocked kick. As a sophomore he racked up an additional 59 tackles, four tackles for loss, two sacks and a forced fumble. Also wrestled and won the 2019 Class 2A wrestling state championship and is ranked #1 at 220 in the latest Guillotine rankings from December 19th. He has two older brothers who both wrestle for the University of Michigan.

Regarded as the #1 recruit in the state, Johnson kept his decision down to the last minute and picked the Badgers after late LSU and Tennessee offers and a strong recruitment by PJ Fleck at the U of M. Four-star recruit by 24/7Sports, Johnson was a All-State and All-Metro selection and a 3x state champion (one in football and two in basketball.) 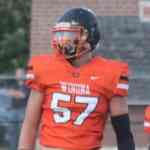 Witt signed with the Badgers after a whirlwind of a recruitment that I can’t remember being matched by any other Minnesota recruit. Witt was committed to Minnesota, Iowa, and Wisconsin at one point, and will be a force in college after being invited to the Minnesota All-Star game, a 2019 Mr. Football Finalist, and a unanimous 3-star recruit.

The Hawkeyes grabbed a good one out of Marshall, as Black earned All-State honors in 2019 and was named district Defensive Player of the Year after earning district Defensive Lineman of the Year as a junior. Marshall went to the state playoffs his sophomore and junior seasons and holds the Tiger school record for career sacks (17.5) and captained the squad as a senior.

A four-star QB prospect, #2 ranked player in the state, #19 ranked pocket passer in the nation, and Buffalo native participated in the 2019 Minnesota All-Star game and finalist for the Mr. Football Award as well as Gatorade Player of the Year. He was a 2x All-State selection, 2x All-Metro First Team selection, 2018 District QB of the Year, and threw for 9,578 career passing yards and his 3,475 passing yards as a junior ranked in the top-5 for single-season passing in state history. He threw for 94 career TDs. 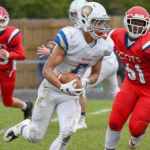 McDonald unfortunately had to sit out the 2019 season after being declared ineligible by the Minnesota High School League, but was still named to the 2019 MN All-Star Game and was awarded Defensive MVP honors. He picked Iowa State over offers from Minnesota, Wisconsin, Iowa, and Purdue, and was rated a 3-star prospect in high school and the #50 safety in the country by ESPN. He was a Second Team All-State selection in 2018 and a All-District pick.

Zenzen tallied 242 tackles, 72 TFLs, 17 sacks, and three forced fumbles in his career and also had 435 receiving yards and 10 TDs. He was a consensus 3-star recite and the 11th ranked recruit in MN. He was a 3x All-District selection and a 2x Midwest District MVP and a 2019 Minnesota Vikings All-State honoree. He was also a 2019 All-Star game player, an AP All-State selection, and a finalist for the 2019 Mr. Football award.

Arrell received all-district recognition both as a junior and senior at Osseo High School. He notched 45 tackles and three interceptions as a junior, then recorded 56 tackles, 3 interceptions and 6 forced fumbles as a senior. He intends to major in business.

Keumogne repeated on the all-conference team, while also earning all-Metro and all-state honors during his senior season at Tartan High School. The district defensive lineman of the year, he tallied 64 tackles, 3 sacks and an interception. He plans to major in mechanical engineering.

Dustman was honored two times as North Central District Special Teams Player of the Year while playing for St. Francis High School. A six-time letterwinner, he was a second-team all-state selection as a junior. In battling through injuries during his senior season in 2019, Dustman averaged 40.2 yards per punt and was 7-of-10 on field goals. Dustman kicked a career-best 51-yard field goal as a sophomore, while his career-long punt traveled 72 yards. He plans to major in business.

An All-Area Team selection, totaled 1423 yards rushing, 19 TD’s, also 103 yards receiving and 2 TD’s. He was a  captain for Mayer Lutheran, All District, and tallied 48 tackles, 4 TFLs on defense.

Was set to sign with the Coyotes, but released a tweet a day ago stating: “Due to changes in the scholarship expectations I will not be signing with USD on December 18th. I want to thank Coach Aurich, Coach Watson, and the USD staff for allowing me to explore my options over the next six weeks. With that being said, my recruitment is open.”

Hayden Johnston Hayden Johnston DL Albert Lea | 2020 State MN (6-1, 259 lbs.) OL. Albert Lea High School https://www.hudl.com/video/3/9936415/5beb22d05797600c588d8d77
Three-year starter on the defensive and offensive lines. Totaled 63 tackles, including 18 for a loss and seven sacks, during senior season and dad 153 tackles including 47 tackles for loss and 16 sacks during his career. He blocked for an offense that ran for over 5,000 yards in his career. 3x All-District selection. 2019 District Lineman of the Year. Played in the Minnesota All-Star game.

TK Marshall (5-11, 189 lbs.) RB. Minneapolis Southwest High School https://www.hudl.com/video/3/8351651/5dc8ccb9664b870f0c437d2c
A soon to be graduate from my alma mater, who hasn’t put out a D1 player in a long time, Marshall rushed for 1,662 yards and 20 touchdowns during senior season. Finalist for the 2019 Minnesota Mr. Football award…Earned Minnesota All-State honors. Qualified for the state track meet while also earning All-District honors.

Mason Miller Mason Miller DL Ada Borup | 2020 State MN  (6-6, 232) Ada-Borup High School https://www.hudl.com/video/3/9657621/5c4693a65b3cb9080c617f4f
A four-year starter and team captain as a senior, Miller played tight end, defensive end and linebacker. 2X All-District selection and Offensive Lineman of the Year in 2019 and Defensive Lineman of the Year in 2018. He totaled 281 tackles in his prep career including 40 tackles for loss and 13 sacks with nine forced fumbles and six recoveries. Had 66 tackles including 15.5 TFLs his senior year along with 18 catches for 311 yards and four touchdowns. Helped the Cougars to a 10-2 record and Class 1A state semifinal appearance.

Loshiaka Roques Loshiaka Roques LB Wayzata | 2020 State MN  (6-3, 215) LB. Wayzata High School https://www.hudl.com/video/3/8228607/5dabb405e985830d88832f78
Three-year letterwinner, two-year starter, and team captain his senior year. Roques played linebacker and defensive line for coach Lambert Brown. He was a StarTribune and KARE11 All-Metro honoree andMinnesota Vikings all-state performer. He had 87 tackles including 20 tackles for loss, 18 sacks and one forced fumble his senior year and helped Wayzata to a 13-0 record and the Class 6A state championship. Totaled 147 tackles and 40 TFLs in his career.

Corrigan played quarterback, tight end and defensive end as a senior to lead his team to an 11-1 record. He was named to the Minnesota Vikings All-State Team. He ran for 31 touchdowns and threw for five as a senior, while making 19 catches for 536 yards and 10 scores as a junior. He holds his school’s career record for points scored in boys basketball and was ranked as the No. 49 tight end prospect by ESPN. The last Minnesotan to play for Boise State was offensive tackle Matt Slater (2007-10).

A prospect not on my radar but an absolute baller of an athlete (I wish I could find film), Orlando is a state champion wrestler at heavyweight for Verndale and as a running back he rushed for 1,430 yards on 187 carries and caught 43 balls for 602 yards to score 30 touchdowns. On the defensive side of the ball, had 258 career tackles, including 41 for loss. Earned all-conference honors in each of his final three seasons. All-Area selection as a sophomore, junior, and senior. Earned All-State as a junior and senior.

A dual-threat quarterback from Detroit Lakes, Gunderson threw for over 2,100 yards and 28 touchdowns while rushing for 765 yards and 11 touchdowns and tallied five interceptions as a defensive player. Named to the All-District team as a junior and a senior for football and as a junior for basketball. 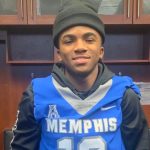 Rushed for over 1,300 yards in his career and was named an All-District HM running back.

Tallied 38 tackles, 15 pass breakups, four tackles for loss, and a fumble recovery in his final year. Named All-Metro First Team by the Star Tribune as a senior. Earned all-district and All-Area honors in his last season.

A very interesting prospect, Haskins was named a First Team All-NSIC performer and D2 All-American at Concordia St. Paul after totaling nine interceptions and 20 PBUs. He then transferred to Iowa Western Community College where he was a NJCAA All-American after he posted 31 tackles and seven interceptions. He had offers from New Mexico State, Troy, Buffalo, Kent State, Akron, Costal Carolina, Louisiana Tech, Charlotte, and of course Liberty. He has two years of eligibly left.

Another JUCO player, Quewon held offers from UMass, Liberty, Arkansas State, Houston, and Southern Mississippi after posting 50 tackles and 5 sacks for Iowa Western this season. The former Cooper standout will have two years of eligibility remaining.

A 4-star WR recruit who transferred to Spire Academy (Ohio) earlier in the year to play basketball with Lamelo Ball, Lockett is the #3 ranked recruit out of MN and held offers from Iowa, Nebraska, and Minnesota.

Travis is the brother of former Stanford and Kentucky MBB baller Reid Travis, and was an All-State and All-Metro First Team performer in 2019 for the Delasalle Islanders. He held offers from South Dakota, UMass, Buffalo, Fordham, Yale, Northern Iowa, Minnesota, Iowa State, and Indiana State.

Hope you enjoyed the article and comment if I missed anyone!