The 2018 football season was an uncharacteristically poor one for the Moorhead Spuds’ football program. The then-sophomore receiver Blake Walthall Blake Walthall 6'1" | WR Moorhead | 2021 State MN was just getting his feet wet on varsity. In 2019,…

The 2018 football season was an uncharacteristically poor one for the Moorhead Spuds’ football program. The then-sophomore receiver Blake Walthall Blake Walthall 6'1" | WR Moorhead | 2021 State MN was just getting his feet wet on varsity. In 2019, Walthall – and many young players’ roles expanded, and so did the Spuds win total.

“My sophomore year we were 2-8,” Walthall said. “Our head coach said the next year we were going to have a big year. We had a lot of talent coming back. Everyone bought in so that summer we worked hard. We started 1-2 but then went on a streak. We found our rhythm. We had a lot of new guys who hadn’t played together much, but once we got that good chemistry, everything clicked, and we started playing well.”

They ended the season as the Section 8AAAAA champions with an 8-4 record.

“On offense, we threw the ball twenty-five or thirty times a game,” the Spuds’ wide receiver said. “Quarterback Trey Feeney 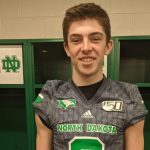 Trey Feeney 6'2" | QB Moorhead | 2021 State MN is a good player, and we have a couple of weapons on the outside. On defense, we had a lot of aggressive guys. As the season went on, they got better and better.”

Statistically, Walthall had one of the best seasons in Moorhead history.

“My season went better than I thought. I caught like eight passes a game. I think we were one of the best passing attacks in the state. My brother and I were the first two receivers to go over 1000 yards receiving in school history.”

Walthall usually lined up wide as opposed to the slot.

“I have good natural athletic ability and natural hands,” the junior explained. “I think I run good routes and can create space. I am a good deep ball threat.”

Like every successful athlete, Walthall’s success started in the offseason.

“Heading into my junior season, I knew I was not a big guy, so I got in the weight room and worked out with Trey a lot. I gained twenty pounds before my junior year.”

Moving toward his senior season, the 6’1″ 170-pound receiver’s improvement continues.

“My biggest area I need to improve is getting off the line. I could have quicker cuts and could be better with my run after catch.”

Walthall moved from one successful season to the next – as a member of the basketball team.

“We broke the record for regular-season wins in Moorhead. I mostly came off the bench. I was a spot-up shooter, and I was a little bit of a playmaker. I led the team in three-pointers made and three-point percentage.”

Instead of baseball and track, Walthall has been working out with one of his teammates – his twin brother, Brady Walthall Brady Walthall 6'1" | WR Moorhead | 2021 State MN .

“I have another competitor I can compete with all the time,” Blake explained. “I always have someone to throw with. He can tell me what I need to get better at, and I can tell him what he needs to get better at.”

“On Monday, Wednesday, and Friday, we have been lifting weights with our home weight set,” Walthall continued. “We have been working out with our quarterback – just finding open fields to throw some routes.”

“Recruiting has been busy with phone calls and virtual visits. It has been fun getting to know all the coaches and learning about the schools. I have four DIII schools looking at me, a couple of Missouri Valley schools, and Concordia-St. Paul and Mayville State also looking at me. What I have heard from coaches are they like my hands, my route running, and athletic ability.”

A big senior season by Walthall might help the Spuds back to State and will keep the college programs calling.