I’m not going to lie to you; I had no idea where Mt. Vernon was. However, they have two very talented prospects in QB Hunter Simmons 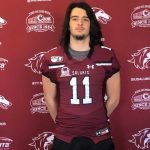 Hunter Simmons 6'4" | QB Marion | 2021 IL and ATH Evan Leake. Leake is a shifty kid who never seems to be short on big plays. He lined up primarily in the backfield as an RB, but projects as a slot WR at the next level. Leake has tremendous vision and always seems to find the cutback lane. His uncanny ability to simply make things happen is what separates him from most.

Daniel is a kid who played pretty much everywhere in 2019 on both sides of the ball. On the offensive side, he has the speed to outrun the defense and a stiff arm that can put opponents into the turf. The defensive side, I believe, is where he does his best work. Daniel is versatile and has experience lining up at both cornerback and safety. As a safety, he’s great at diagnosing the run, closing space and speeding his feet on contact. As a corner, he has quick feet and has the ability to play up in press. Overall, I think his position is safety, and that’s where I believe he’ll line up at on Saturdays.

One of the things that makes Freeman such an intriguing prospect is his length for a defensive back. It’s not that easy to find cornerbacks that are 6’ ft plus nowadays. Freeman plays well out of a shuffle, has good speed and can overlap on routes in coverage. He plays fundamentally sound running to the near hip & leaning and locating the football. He’s comfortable in press and has no issues fighting off blocks and making a tackle. Freeman can put his foot in the ground and get out of his breaks quickly. To me, he’s a kid who could shoot up recruiting boards with a big senior season.

Conroy has a unique mixture of size, speed, and strength for a big defensive lineman. Conroy’s go-to move is the bull rush and does a great job of getting off blocks, whether it be in the run game or the passing game. I was shocked at how quick his get off is for a guy his size, but it makes sense as Conroy has been clocked in the mid 4.7 range in the 40-yard dash. In the classroom, Conroy excels as well, holding a 4.39 GPA and a 1450 SAT. I think he’s a 3 technique at the next level due to his great frame he can grow into and a powerful punch that gives interior defensive lineman problems.