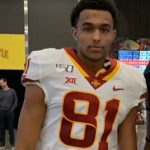 This is a gifted TE prospect that is only going to continue to develop. As a junior, Morris lined up primarily on the outside at X receiver, however, most colleges project him as a TE at the next level. Morris does a great job on his stem in his routes and can plant his foot and come out of routes effortlessly. He’s an exceptional route runner for a guy who is 6’6. Morris excels, bursting off the line and breaking the DB’s cushion. More often than not, he’ll push at the defenders outside shoulder, get him to flip his hips early and plant and come underneath him. Morris is a matchup nightmare in the red zone and a likely target for the 1 on 1 ball. Morris is a natural hands catcher and doesn’t fight the ball in nor use his body. I think he’ll cause problems for LB’s or rolled up safeties at the next level when working out of the slot. I’m very interested in watching him as an inline blocker at the next level, as he didn’t do it at Nazareth last season. However, I do think he has the ability to get it done and is going to add a ton of muscle when he gets on campus.

I think overall; this is an excellent fit for the orange & Morris. Syracuse is known for their wide-open offense and getting the ball to playmakers in space. Morris, I believe, will fit right in, as Syracuse does use a ton of 11 personnel and will not have to sub him much in 10 personnel sets as he is already a talented route runner. Syracuse has a solid pipeline in Illinois from head coach Dino Babers time at Eastern Illinois and Bowling Green. At both of those stops, Babers won a conference championship with a lot of quality talent from Illinois. I see Morris being used in a similar way to Jeff Lepak, who was a TE at Eastern Illinois for Babers and is now on staff at Syracuse as a quality control. Often, they had no issues keeping Lepak on the field for long periods of time because he caused a serious mismatch. Due to the COVID-19 outbreak, Morris was not able to visit Syracuse but felt comfortable enough with their staff to give them his verbal. Dino Babers “orange is the new fast” offense got a great catch in Morris, and I got feeling we’re going to be hearing a lot about him in the years to come.