It’s hard not to buy stock into the  Thomas Diew Thomas Diew 6'8" | DL St. Cloud Apollo | 2022 State MN  hype train even though he’s only a sophomore. With the examples 2019-20 has given us in-regards to players recruitment exploding who share similar measurables with the St. Cloud Apollo product such as North’s Davon Townley and Annandale’s  Logan Purcell 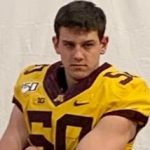 Logan Purcell 6'7" | OL Annandale | 2021 State MN , there’s a lot of reasons to buy as much stock as possible. The 6’7, 230 lb. DE is a standout basketball player for Apollo and has a ridiculous amount of upside on the gridiron that has earned him a #26 (for now) overall ranking from Northstar Football News for our 2022 rankings and a special shoutout from GopherIllustrated and former NFN contributor Ryan Burns as a player to watch in MN for 2022. Watching his film just makes me excited, as Diew shows an almost unblockable combination of length and strength with some good use of his hands and an absolute insane amount of room to grow on his 6’7 frame. As I said, there’s a lot to like, and I was pumped when the rising junior agreed to answer a few of Northstar Football News questions about his underclassman experience at Apollo, how basketball affects his game on the gridiron, what he’s looking for in recruiting, and more. Thanks for reading, and I hope you enjoy! Sophomore Season

NFN: Hello and thank you for your time, Thomas. Please begin by telling us about yourself, when you began playing football, and what you love about the game. Please also include your measurbales and stats from last season.

Diew: “I have been playing football since I was 14. I am unpredictable and am a leader. I really love playing the sport of football because it’s a physical sport. I can go out on the field and hit someone with it being OK. I am 6’ 7” and weigh 230. I got my first start the 4th game of the year. I recorded 10 solo tackles and 12 assisted tackles with 1 sack a half season.”

NFN: Now get into a little bit about your freshman season in 2018. What were some highlights and lowlights? What did you learn from the year? And how was your adjustment to high school ball?

Diew: “My freshman season was a very successful one. We finished the season 4-4. We were 4-0 and barring an injury to our starting QB in the 5th game we may have finished with a better record. Some of the highlights from that season were the sack against big lake was my favorite. The biggest thing I took away from my freshman season was that I needed to hit the weight room. I thought I had a good year at the freshman level, there is still room for growth, but I played DE and some WR. The biggest adjustment to high school football for me was the little things on every play, team bonding and trusting one another to do their part.”

NFN: What were expectations like for you and the squad going into 2019? What did you focus on in the offseason and what do you like about the Apollo program?

Diew: “Expectations for myself going into the year were to go out there and dominate and for the team was to win the district and just to win as many games as possible. We finished the year pretty solid in 2018 and had several guys back from that year so just wanted to continue the success from the previous year. In the offseason I really focused my attention in the weight room to improve my speed and strength. The biggest thing I love about being a part of Apollo football is the culture and the coaching staff.”

NFN: You’re a successful basketball player for Apollo..how does bball help and affect your game on the gridiron? What do you like most about basketball?

Diew: “The biggest thing that basketball helps me on the field with is my footwork and quick hands. The same goes for basketball, football helps by my physicality. The thing I like about basketball is that I grew up playing it and I have love for the game.”

NFN: You’re starting to get some hype and exposure as a football recruit, how do you feel about all the acclaim and how does it impact your mentality going forward?

Diew: “It feels great to be highly regarded as a sophomore but that isn’t my biggest concern, my concern is being the best player that I can be each and every year. If I do that then everything else will take care of itself. I just want to continue to improve my speed, strength and power. I also want to continue studying the game of football to learn from others and put that into my game. I see myself playing DE and TE in the future.”

NFN: Well said. Now get into some details on the 2019 season. Who’d you play, how’d they go, and what are you guys doing to prepare for the 2020 season?

Diew: “In my sophomore season this past year I started to see some playing time sparingly at the beginning and then got my first start against Hutchinson. We played a tough schedule this past year with 3 of our 8 opponents making the state tournament and Rocori winning state. We won our first game against St. Francis and then lost a tough one to St. Cloud Tech. We didn’t finish with a record we wanted but we competed and battled against some very good teams. Some of my best games were against Big Lake. We have already been working real hard in the offseason to improve from our season. We have been dedicated to the weight room and then just getting some throwing in on our own with the guys whenever could. We have a lot of talent coming back and we just need to put it all together and play winning football next year. Some of my favorite teams to play against are Tech and Big Lake.”

NFN: Now share about sections from last season. Also, have you began to hear from any colleges about playing football of them? How about basketball?

Diew: “Last year in sections we lost to a very good Moorhead team, which also made the state tournament. We started a lot of young guys in that game and so we all got some good playoff experience and know what it takes to compete at the highest level. I haven’t necessarily heard from any specific coaches for football besides a few recruitment letters but I have been getting tons of calls for basketball.”

NFN: Lastly, what are you looking for in a college? How does basketball play a role? Also, what do you do well as a football player?

Diew: “The things I am looking at in a college are diversity, a good culture and a good community. I am looking at either football or basketball right now. I am focused on being the best player I can be at both sports. The biggest thing I do well as a football player is play with a high motor and use my length as leverage.”

This won’t be the last you hear of big #87 for Apollo. With such a high ceiling as a prospect there’s no telling how where his play on the gridiron can take him. Whatever happens, Northstar Football News is here to keep you updated. Thanks for reading!