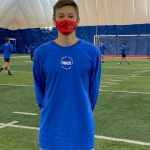 Leyton Simmering 6'1" | K Rosemount | 2022 State MN  of the Rosemount Irish. We’ll chat with Simmering about his kicking journey, what’s on his recruiting trail, and why he’s all about the brand among Minnesota high school specialists.

Get to Know Leyton Simmering

Simmering takes care of all the kicks and punts for the Irish football team. He got started kicking from when he picked up club soccer starting in the first grade. He spent 10 years focusing his kicks on soccer before he transitioned to the game of football. All that work Simmering spent on soccer, has given him the development and skills necessary to become a strong kicker and punter.

As a sophomore, Simmering spent most of his time kicking and punting on the junior varsity and sophomore team at Rosemount, starting under KARE 11’s specialist of the year Nathan Whiting, who is headed to NDSU this year to kick for the Bison. Starting JV, sophomore, and backup on varsity gave Simmering plenty of opportunities to kick the football. Although he had plenty of work, Simmering said “I won’t change the experience for anything,” as he got plenty of reps for the Irish all in all. His stats to end the year he was 50 of 53 on PATs and 6 of 8 on field goals with 3 of the 6 being over 40 yards of 47, 41 and 40. Those kinds of numbers would have started just about anywhere in Minnesota but Rosemount last year with the talented specialists they have! Kickoff wise 1 of every 3 kickoffs Simmering sent went for a touchback and he had an average of 57 yards per kickoff. His main strengths are his kickoff distance and hangtimes along with long-distance kicks of 40+ yards with a high accuracy. You can’t forget that Simmering had three touchdown-saving tackles on special teams a small, but exciting stat that would make the great Pat McAfee proud.

Best Parts About Being a High School Kicker/Punter

Simmering said the best part of being the kicker/punter in high school football. “Being able to watch the game and cheer on my teammates from the sidelines, but then when it’s my moment all eyes are on me.” When Simmering gets that job done, he feels the noise of support from the crowd on what he just did for his team on the field.

Simmering certainly wants to play college football, but he’s still focused on being the very best high school athlete he can be. “There is nothing quite like playing for Coach Erdmann under the Friday night lights in Rosemount,” Simmering told NFN, as he enters into his junior year of football as a part of the Rosemount Irish. As a 2022 prospect, Simmering has already gotten some love from the Big Ten, as Wisconsin has invited Simmering to participate in their special teams camp over the summer. That’s a great sign as a 2022 specialist, as power 5 schools don’t make their move usually that early on specialists. Simmering has also heard from one program in the WIAC, Wisconsin-Eau Claire and the NSIC, from the Wolves of Northern State in Aberdeen, South Dakota.

As for Simmering’s elevator pitch to those college programs subscribing and ones he hasn’t met yet he had this to say is one of the best pitches I’ve heard in my time at NFN:

I would have to say that I am one of the most hardworking and competitive kickers around. My love of the game has pushed me to be the best I can be. I am cool, calm and confident under pressure and thrive on the opportunity to do the best I can possibly do for my team. While I have had some good success these past 2 years as a high school athlete, I know I still have a lot of work to do. I have laid a good foundation with my fundamental kicking game. Considering my current size, I know I am going to continue to get bigger and stronger which will ultimately help me improve over time.

Simmering’s focus on his kicking this offseason has been his backswing. All the coaches who have watched me including Rosemount kicking specialist coach and former minor league kicker Ken Becka were always wondering how Leyton had so much force in his backswing when kicking the football. When Becka locked in and analyzed his swing, they thought it was a rather fast swing which could cause a lack of control. Simmering has worked hard this offseason with Becka on his backswing and “intends to combine that with my natural leg speed to keep improving my distance,” Simmering said about the offseason item he’s working on most.

Leyton has a significant amount of kicking mentors that have guided him over the last few years into becoming a productive kicker and punter for Rosemount. Last summer, Leyton attended a camp of Gary Zauner who to those who don’t know, spent 11 years coaching as a college special team’s coach and is the first full-time special teams coach in NCAA football history. Zauner also had a 13-year career as a special teams coordinator in the NFL for the Vikings, Ravens, and Cardinals. Simmering said he clicked well with Zauner’s coaching style and came back for a private lesson. “He taught me not to crunch while kicking and to keep your chest up while kicking, which helped me to kick the ball better with less effort,” Simmering said about what he learned from the former special teams’ coordinator in the NFL. Another coaching duo that has done a great job of mentoring Simmering is the Special Teams Football Academy led by Chris Husby and Brian Jackson. What they have put in with their National Kicking Rankings has created a competitive dynamic when it comes to specialists. Simmering went to his first camps of theirs a year and a half ago, and just has continued to keep participating in their training camps and dialing up what he learned on his own time from their camps. Another mentor we’ve already mentioned that’s a mentor of Simmering is Ken Becka who was first to notice the possible backswing weakness in Simmering’s kicks. He has been the guy to help all offseason on getting Simmering’s backswing up to a new level of great. All in all, these four mentors have led Simmering to becoming 1st ranked kicker, 2nd ranked punter nationally by National Kicking Rankings which should give the state of Minnesota a specialist to watch over the next two years even more.

In his final statement on what makes him a #ForTheBrand specialist in our fine state, Simmering told NFN:

I am a #ForTheBrand kicker because when it comes right down to it, I just really love to kick and I also really love Minnesota football. My goal is to play collegiate football and would love the opportunity to draw attention to my own kicking game in addition to all the really great kicking talent we have here in the state of Minnesota.