At 8-0, the Hutchinson Tigers’ football team had their typical outstanding regular season. They turned that regular season into a playoff run that didn’t end until the state semi-finals. Sophomore Sam Rensch 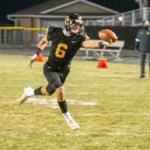 Sam Rensch 6'6" | DB Hutchinson | 2022 State MN played a huge role in the Tigers’ post-season run. Rensch thinks the Tigers can be even better next season.

“We worked really hard this year, and it paid off with a trip to State,” Rensch said. “We had a shot at it and tried our best. Our results were really good, and we will be back strong next year for sure.”

Rensch explained the strengths of the 2019 team.

“Our running game was good, and our pass defense and zone defense improved and was good too,” Rensch said. “It is just going to get better because we don’t lose anybody in our secondary next year.”

Just a sophomore, Rensch knows he has a long way to go.

“For my first year, I think it went well, but I need to get better and keep working hard.”

On offense, Rensch was one of the team’s primary weapons in the passing game.

“I was usually lined up out wide. Deep routes are my strength. I have good speed, and I am long. I can jump over people and run by people.”

A two-way starter, Rensch anchored the back end of the Tigers’ defense.

“The speed of the (varsity) game was different. After the first drive on defense, I was already tired because I wasn’t used to the speed. After the first game or two, I started to feel like I fit into the team.”

A three-sport athlete, Rensch, is involved in at least one sport all year long.

“I play point guard. My main goal is to get as many assists as I can. This is my second year starting,” the 6’6″ and 185-pound athlete said. “In the spring I play AAU basketball and baseball too. In baseball, I play shortstop and second base. I hit pretty well too. I am a line drive, and base hit kind of hitter. I will continue with baseball and basketball through the summer.”

His busy schedule doesn’t give him much time, but he has been mainly working on his quickness.

“Whenever I can, I work with my dad, throwing the ball around or getting into the weight room. I work on my quickness and maintaining my strength.”

Maintaining might be what he has in mind for his workouts, but maintaining the success of the Hutchinson football team is not what Rensch has in mind. He expects even bigger things in 2020.